The Power of Laughter

I will do my best to keep this one short but there is really a lot to write about today. The past day and a half have been filled with stories and inspiration worthy of several blog posts. Here goes nothing.

As soon as we arrived at I.M.P.A.C.T Ministries–a functioning Red Cross Shelter– It was all hands on deck! And I truly mean all hands on deck: it took the majority of the working staff to offload both vehicles of supplies. By the end of it, we had figured out an efficient hand off line that stretched from the back room of the Streakin’ Deacon to the sorting tables.

I can’t go any further without mentioning our wonderful coordinator throughout the two days, Karey Pierre. You really just have to meet her. She has one of those smiles that makes you want to hug her.  And she’ll be huggin’ you before you can even introduce yourself. Here’s a picture Chelsea took of Karey and me in front of the Streakin’ Deacon: 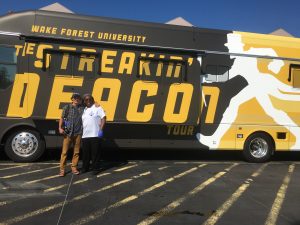 After we finished unloading the Streakin’ Deacon and the surplus truck, we toured the facility with Karey and prepared to head down to Tarboro. The building, a converted Home Depot, was truly impressive. Even more impressive and inspiring were all the volunteers who were helping sort the mountains of clothes and the piles of donations. They reminded me of you guys, the Wake and Winston community, joining hands to help those in need.

Our next task involved shuttling people from Tarboro High School shelter to I.M.P.A.C.T. The idea was to move some people to a facility that had more capacity than the crowded high school gym. Thankfully, by the time we arrived many of the folks sheltered at the high school were beginning to move out. Karey still managed to round up a handful of victims to bring back to Rocky Mount for some food and showers. In total we had about 10 people in the Streakin’ Deacon. The T.V. was a big hit on the ride over!

We spent the rest of the afternoon hanging with some of the kids. My favorite moment was picking up little Henry so he could dunk on the small basketball hoop. The way his eyes lit up as he soared through the air was worth the whole trip. Perhaps laughter heals.

I think Karey sums it up best when she describes I.M.P.A.C.T. ministries:

Sounds like another way of saying Pro Humanitate. Our hearts go out to those affected by Matthew.