Hope in the Trees

“This park is going to be so pretty one day,” Jane Cage (’78) says with a steady gaze.  We are strolling by a row of saplings in Mercy Park – the unofficial ground zero for the EF5 tornado that ravaged the small town of Joplin only 6 years ago.  The trees are barely nascent but Jane can already feel the shade from their broad canopies.  For her, these trees represent hope and resilience.

It is a future that Jane has been instrumental in affecting since 2011.  Whether it’s the new medical school down the road or the recently constructed library on E. 20th, Jane’s touch is pervasive.  She’d never outright tell you all she’s involved with – instead it flows from her like a story line.  She had a story for every building and tree we saw on our brief but thorough driving tour of Joplin.

“These are the trees we planted a few years back. The ones just down the road are doing much better,” Jane surveys as we turn down a residential street just a few blocks from Mercy Park. “We’re asking a lot of our citizens to water these trees. I know they can do it though.” 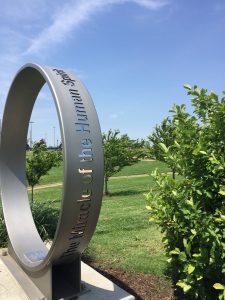 “The Miracle of the Human Spirit” – bracelet many wore during cleanup

We continue our drive east and pass by a mangled tree stump.  What trees the tornado didn’t rip out of the ground, it left bark-less and dead. Out here, they are pointy tombstones.  Jane quickly interjects,

“We need to get rid of these ugly stumps. They look so bad. I think we could organize some kind of removal effort. It’s long overdue.”

For Jane – and many other leaders in Joplin – the recovery effort did not end when the debris was cleared.  Long term decisions had to be made.  Hospitals had to be rebuilt.  Homes had to be restored.  Schools reconstructed.  And yes, trees replanted.

It is impossible to know just how much time Jane and countless others have invested to bring Joplin where it is today.  How could someone attend crucial city council meetings – some lasting well past midnight, sit on numerous relief organization boards, and help coordinate with FEMA all ON TOP OF their day jobs?  This kind of sacrifice is hard to comprehend and stems from a robust mixture of faith, hope, and love. 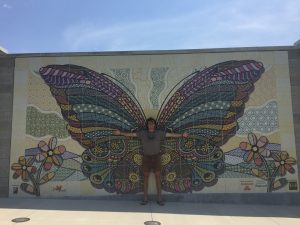 The rain is really starting to come down now and Jane seems to be getting a little giddy.  We take a turn down S. Rangeline Dr. and pull up to Shakes Frozen Custard.

“No tornado tour is complete without a trip to Shakes,” she sings as we pull up to the drive thru.  Megan and I both join in the laughter and settle in to our seats.  The drive back to her house will be equally as eventful : narratives exploding with compassion and perseverance.

I am staying in the guest bed closest to the kitchen. Someone is always staying in the guest bedrooms – this weekend it is me, next weekend it will be the FEMA representatives, and somewhere down the road it will be a white house correspondent.  Or maybe that was last week.  All to her little house in Joplin, MO where her dogs, Jack and Bailey – both rescue dogs – will greet you with a friendly bark.  Ask Jane about the extra pair of shoes in her basement or the copper angel with piano key legs hanging in her kitchen.  Or maybe just start with the trees.