You read that correctly – The Streakin’ Deacon was stranded for a little over 24 hours in Key Biscayne, FL. Not a bad place to be stranded if you ask me: 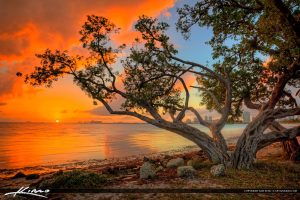 Ok, so there wasn’t a beautiful mangrove tree by the water but we did have an incredible sunset from the Sky Deck before we realized our hydraulic jacks were locked out! For those of you not familiar with motor coaches, larger RV’s normally have a hydraulic leveling system that will stabilize the vehicle on uneven terrain. It would be as if you had four pneumatic, self-leveling stilts underneath your car that were capable of lifting your car completely off the ground tenfold. Ahh the power of fluid dynamics…

Picture again such a system working in only one direction: DOWN! So we realized shortly after sunset that our beloved Streakin’ Deacon – a featherweight at 14 tons – was stuck floating in midair! We weren’t going anywhere, anytime soon.

After I tried several combinations of “dashboard tricks” (I owe this problem solving technique to my dad), I was asked to leave the premises and the Streakin’ Deacon until the park reopened the following day. Here’s the note I left on the dashboard: 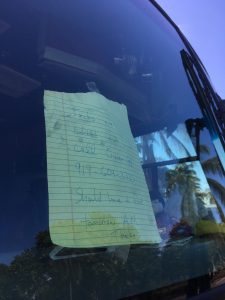 I returned the following morning feeling optimistic about our exodus from Crandon Park. I had a couple hours worth of Uber rides to think strategy (West Palm isn’t exactly a hop and jump away) and come up with a game plan. Chelsea apprehensively pointed out that the same thing had happened in Charlotte earlier in the year and it took a team of mechanics to fix. Unquestionably daunted and over a thousand miles from home, I did what any person in a dire roadside situation would do: call AAA. I had to pretend to be Chelsea because my own account had expired. The lady kindly told me that “my membership level did not cover RVs.” And it was a President’s Day so the mobile mechanics weren’t open. My best girl’s voice couldn’t even solve this problem. Now what?

Away to the manual I flew like a flash, tore open its pages and started to hash. I got on the phone with a technician who told me to unplug some wires and make some new ones with a paper clip. Apparently we had to “trick the system.” The only system I was tricking was myself and my mechanical disillusionment.  Was it possible for grease to permanently stain my skin? 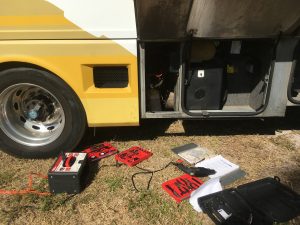 Determined, I caught a ride to the hardware store and bought a power drill. This was my last resort. There was a manual override switch on the hydraulic pump that allowed desperate users to insert a drill into it and ultimately retract the un-retractable. The drill method worked like a charm on every jack except one! Still couldn’t drive away with one jack fully extended. In my greasy daze, I found some palm branches and began striking the stubborn jack. Why were all these people staring at me anyways?

Well the jack finally came up and the Streakin’ Deacon was saved. I was happy…and greasy. The end. 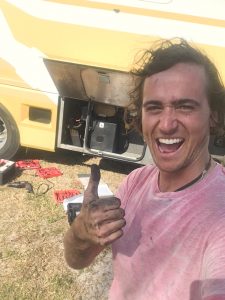