There’s magic in the air. You may know what I’m talking about if you live in the Charleston area. It goes something like this: one day you wake up and you’re on your morning stroll and the patch of greenery that used to be overgrown is now neatly pruned and weeded. Maybe you see it and think, “so glad the city is paying landscapers to upkeep the park.” Maybe you don’t even notice. MAYBE, just maybe, you think the park gnomes broke in to old man Billy’s tool shed again and got busy. They’re always causing trouble…

Call them gnomes. Call them trolls. Call “it” magic but they are more than all of those combined. They are Park Angels. And angels are just what this dedicated group of Charleston Park Conservancy volunteers are – men and women doing the work no one else wants to do.  They are the volunteers you don’t see: mud and sweat covered faces, weeding through overgrown shrubs and hand pruning winter plumbago. If you didn’t notice their dirt caked fingernails, you wouldn’t know them from Adam. Yet, their countless hours are the reason these parks stay so beautiful.

I had the opportunity to spend the past two days working alongside these celestial cultivators and it gave me humble pause when I began considering their work in the context of pro humanitate. Isn’t the purest form of pro humanitate the kind that is anonymous? Does pro humanitate assume nothing in return? Is it familiar with recognition? There is an old scripture that reads, “And when you give, do not let your left hand know what your right hand is doing.”

On our last day together, I wanted to grab a picture with the whole group. It was mostly for selfish reasons – who doesn’t want a picture with a host of angels? I went to grab the phone from the lady who took it and when I turned around to thank everyone…they were all still there, smiling and dirty. Reality check. We removed our gloves and shook hands. From there, we nodded goodbye and returned to the gentle city from whence we came – same clothes, same shoes, same as any other passerby. Just a little dirtier. 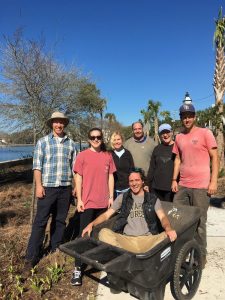